Pride here, Prejudice there: LGBT communities across the Euro-Mediterranean region

On the first weekend of August, Brighton celebrated Pride, its renowned Lesbian, Gay, Bisexual, and Transgender (LGBT) festive event. The celebrations started with a huge Parade across the city and a huge party in Preston Park on 2nd August, and a village festival in Kemptown area that lasted until midnight following day. The Brighton Pride celebrations have been organised regularly since 1991. The massive participation to the Pride Parade 2014 has seen an explosion of colours, dances, music, smiles and joy. Participating groups and individuals included numerous local and national LGBT groups, student organisations, police, fire fighters, city council departments, political parties, and local businesses.

Proudly the city of Brighton and Hove has the largest LGBT community in the UK with an estimated twenty per cent of the population who described themselves as a member of the LGBT community. The 2011 census showed that Brighton and Hove also had the highest number of civil partnerships in the country, at 2,346 individuals or 3.1% of all legal relationships within the unitary authority area. Brighton and Hove still firmly stands as a city that always welcomes people from all walks of life regardless of their backgrounds, beliefs and inclinations, and LGBT community are warmly included in this. 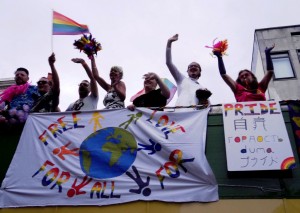 During the Parade this year, it was encouraging to see that the challenges faced by the LGBT people around the world are addressed in a very public and vivid way: marchers carried placards with the list of 78 countries of the world where the LGBT rights and freedoms are totally prohibited, restricted, and almost always harshly punished. In this respect, the Parade in Brighton provides an opportunity to remember individuals in other countries where their LGBT rights are not recognized. For instance, the participants of the Parade heard that in Uganda, following the proposal for an Anti-Homosexuality Act this year, it was opposed by some politicians and the communities which resulted in the rejection of the proposal by the Uganda’s Constitutional Court.

The punitive laws that target the LGBT people vary greatly by country or territory. Some countries recognize at least same-sex marriage or other types of partnerships, whereas others impose death penalty against the sexual –or even romantic– activity between the same-sex couples, or sometimes even if simply define their identity. 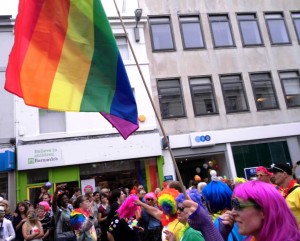 So, how does the current LGBT picture look in the Euro-Mediterranean region? Perhaps we can have a very brief introductory look at the overall situation, as if playing a prelude without the detailed, complicated and lengthy song itself. Let’s see the Prejudice “there” whilst we enjoy the delightful Pride “here” in this warm and welcoming city:

Within the Middle East and North Africa (MENA) area, vast majority of the North African countries declare the same-sex sexual activity illegal and the punishments range from 2 years imprisonment (Algeria) up to 10 years (Tunisia, Morocco, Libya). In Egypt, on the other hand, it is not specifically illegal for males, but is possible to punish individuals with up to 10 years of imprisonment through broadly and flexibly defined morality laws.

The situation in the “old continent” seems to be different. Europe is considered as one of the more progressive continent, even if it has to deal with its exceptions. Eleven out of the seventeen countries have legalised the same-sex marriage and further twelve European countries have legalised civil partnerships or other forms of recognition for the same-sex couples. The nations that are currently considering legislation to introduce the right to same-sex marriage are Austria, Finland, Germany, Greenland, Ireland and Switzerland, but a strict constitutional ban on the same-sex marriage is still in force in some European countries, namely Belarus, Bulgaria, Croatia, Hungary, Latvia, Lithuania, Moldova, Montenegro, Poland, Serbia, Slovakia, and Ukraine. 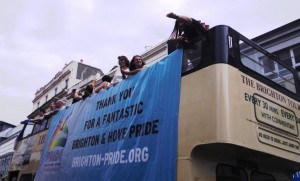