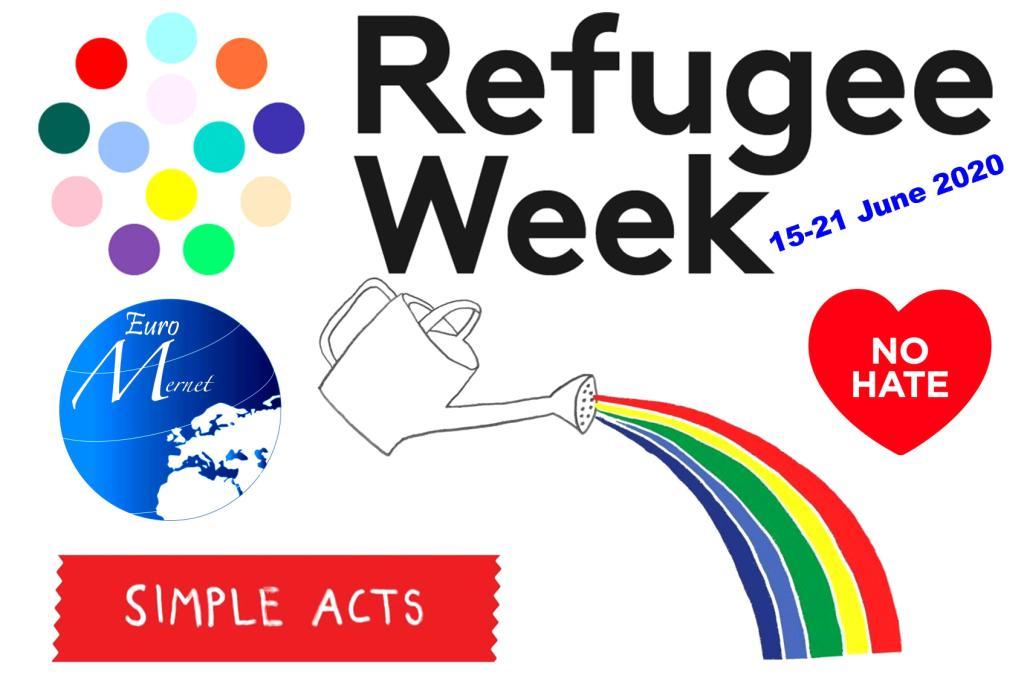 Dear friends, here is the calendar of events by Euro-Mernet prior, during and after the Refugee Week. Although the Refugee Week runs from 15 to 21 June, we have extended our events calendar so as to include content from further locations around the world. We hope that you will join us in enjoying the events and in celebrating the Refugee Week together. Any changes and news updates about these events will be instantly posted on our Facebook page: www.facebook.com/euromernet

Please do not heistate to contact us if you have any questions or need further assistance.

We leave you with the events calendar and with our organisation’s motto: Love, peace and solidarity.

N.B. All Euro-Mernet events are free. All welcome

Exclusive 2 hour shows on Refugee Week 2020: with studio guests; quotes, poems, and songs for and by refugees.

EuroMernet Film Club: “Love in the Time of Cholera”

Imagine a resilient quest for love for 50 years: Based on the novel of the same name by Gabriel García Márquez, it tells the story of a love triangle

John Lennon inspired this year’s Refugee Week theme, “Imagine”. So here’s an intimate documentary, pieced together from archival footage of the Beatles and 240 hours of home movies shot by Lennon and his widow, Yoko Ono.

In collaboration with Joanna Suchomska            Imagine the best of the worlds: Throughout the week, short interviews with the participant will be aired as daily episodes. Further entries in future will be displayed online on the Facebook page of “Brightest & Best” and all the images and footage will be publicised widely by EuroMernet.

Young girl Nedjma is passionate about holding a fashion show in 1997 Algiers, a time when women were brutally targeted and many people became refugees/internally displaced.

Imagine a life with your best big life guide: Set in the Rif region of northern Morocco in 1975, the film tells the story of 10-year-old Amar and his interactions with a Spanish refugee named Carmen, who introduces him to film.

Imagine a world without wars: We will be hosting a talk via Zoom. The talk is organised through the Refugee Voices – Conversation Partner (CP) programme of NaTakallam (“We Speak” in Arabic) in collaboration with Counterpoints Arts, and our Brighton-based partners Sanctuary on Sea and Community Base. The event is made possible thanks to a grant by Ben and Jerry’s.

Our guest speaker Shadi K. is originally from Qamishlo, Syria. Due to conflict in his home country, Shadi moved to Erbil, Iraqi Kurdistan. Before working with NaTakallam, he worked as a music teacher and translator. Shadi will share with us his experiences and his love of music and reading.
(And we will tell you the story behind this event title and our choice of the main photo on the event poster!)

Imagine a world where you can be a Robin Hood: Spanish anarchist Lucio Urtubia Jiménez (b.1931) carried out bank robberies &forgeries throughout the 1960s & 70s, giving the money to poor communities & progressive movements.

In collaboration with  Brighton and Hove City Libraries.

The exhibition looks at the stories on utopian societies and people behind it: Text, photos and artwork telling the stories of  individuals and communities who dreamt about a city, country or world order where everybody would live happily. Sadly almost all of them had paid  the price of their dreams with their lives.

Imagine the community empowerment through music: A soul-stirring documentary with exclusive interviews and never-before-seen film footage showing the vital role of music in the struggle against apartheid in South Africa.

Exclusive 2 hour shows on Refugee Week 2020: with studio guests; quotes, poems, and songs for and by refugees.

Imagine a long journey through places and along the memory lanes: Chinese young man Xu Ivan plans to go to USA for work purposes. However, his plans are foiled when he decides to follow his mother on a train to Moscow. A hilarious series of events unfold from the moment the train departs.

In collaboration with  B&H City Libraries, New Writing South, and Writing Our Legacy

A poetic homage to Refugee Week and the forthcoming World Refugee Day (20th June) by writing a short poem on a tile (any material e.g. ceramic, wooden, paper) and displaying it.  Guests are invited to post their tile photos on social media throughout the week.

Imagine a world without violent extremists dominating life & women: Two young French women go to Syria to fight alongside the Kurdish forces against ISIS. There they meet Zara, a Yezidi survivor. Born in different cultures but deeply united, the women-fighters heal their past wounds and discover their present strength, especially the fear they inspire in their opponents. The three young women soon bound together and become true sisters-in-arms.

In collaboration with No Hate Speech UK

Activists’ Parade to mark the Refugee Day (20th June) is an action we had been organising near Churchill Square for the last four years, in solidarity with the refugees worldwide. This year, due to the lockdown,  we will wear “online red umbrellas”. A panel of speakers and guests will be invited to read out their support and solidarity statements. Guests are invited to post their photos on social media.

Red Umbrella Online Parade joins forces with Message in a Bottle, the project by our artist friends Gil Doron and Jane Lancashire. It’s an interactive online exhibition with images from the development of Message in a Bottle installation and phone messages of support to people crossing the Mediterranean.

Imagine a love story surviving a war and a century: Moving drama with two Greek and Turkish lovers who are separated during the war at the turn of the century when their families had become refugees and endured life in exile.

Online gathering with statements of counter-narratives against hate speech and disinformation campaigns targeting the refugees. Online “Human Chain” action on Zoom. Guests are invited to post their photos on social media.

Imagine a new land : Ramin, a young Iranian gay man flees his country & ends up in Veracruz, Mexico by accident. He suddenly finds himself far from everything he knows, living the life of an exile in this nostalgic, tropical port.

Imagine a diverse society – with a diversity of laughter: In this comedy show, Maz focuses on current political environment. He satirises the anti-immigrant sentiments, talks about immigrants in the USA & their contributions to society.

Imagine a world where you can be a time-migrating soul: Allan Karlsson is a 100-year-old explosives expert who is so bored in a retirement home that he jumps out of a window. As he begins an unexpected adventure, he reminisces about key moments in his life which were also key moments in world history.

In collaboration with  B&H City Libraries, New Writing South, and Writing Our Legacy

A poetic homage/epilogue to the immediate past Refugee Week with examples of poems through history, written by poets during their journeys in exile, some of whom had always hoped that they will be flying back to their homeland like a migratory bird. Participants are welcome to read their own poems on the topic if they have one or more. In the second half of the event, we will also mention the poets Anna Akhmatova (Russia) and Ahmet Hamdi Tanpinar (Turkey), Albert Giraud (Belgium) and  Anthony Thwaite (UK) who were born on 23 June, and to Nicolau Tolentino de Almeida (Portugal), Hidir Lutfi (Iraq), Boris Vian (France), Harindranath Chattopadhyay (India), and Manolis Anagnostakis (Greece) who had passed away on 23 June.

Imagine the village where life is a collective theatre: 50 years ago, villagers in a tiny Tuscan town had come up with a remarkable way to confront their issues: they turn their lives into a play. Every summer, their piazza becomes a stage and residents of all ages play a part — the role of themselves.

Exclusive 2 hour show on Refugee Week 2020: with studio guests who will be evaluating the Refugee Week events in Brighton and Hove.

Imagine the power of one ethically-minded soul exposing the corruption at the United Nations: Political thriller directed and co-written by Per Fly, and based on the eponymous memoirs of Michael Soussan. It follows the real life corruption scandal in the UN Oil-for-Food Programme in Iraq.

EuroMernet Film Club: “I served the King of England”

Imagine dangling between fame and fortune: Based on the novel of the same name by Bohumil Hrabal. After serving 15 years in a Czechoslovakian prison, Jan Díte looks back on his life as an aspiring millionaire. While in constant pursuit of money, Jan has a string of affairs and a relationship with a fanatical Nazi that lead him towards temptation and social ruin.

“The Boy Who Harnessed The Wind”

Imagine a boy fighting not against the windmills – but for them:  A 13-year-old boy is thrown out of the school he loves when his family can no longer afford the fees. He sneaks into the library and learns how to build a windmill to save his village from a famine.

Imagine a world where the youth are reducing the pains of our  planet: Passionate teenage innovators from around the world (mainly India, Indonesia and Mexico) create cutting-edge solutions to confront environmental threats.

Imagine a man’s solo quest to defend women’s sanitary rights: Based on a true story. Laxmikant is upset when he sees Gayatri, his wife, using an unhygienic cloth during her menstrual cycle. Thereafter, he creates a machine that can make affordable sanitary pads and raises awareness.